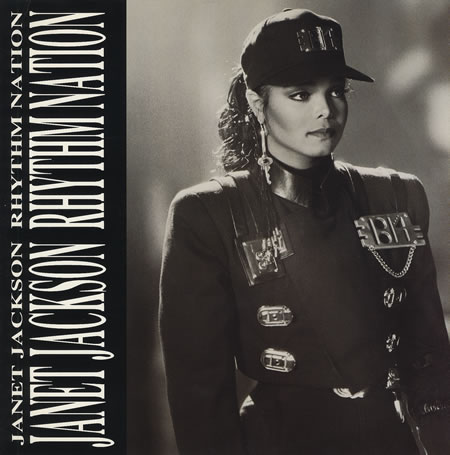 We start off in some huge and creepy warehouse, where we don’t really know what’s going on other than someone forgot to put color film in the camera. Everything is all black and white, so this is going to be really arty and/or really low-budget. There’s an ominous elevator coming down from somewhere, water dripping down the walls, and menacing machines all over the place that probably have evil functions that we don’t want to know about.  Janet and her little friends are doing that monotone voiceover, sounding like Franciscan monks practicing for an exorcism. This is not a destination that Little Mary Sunshine would program into her GPS.

The camera zooms in on a young man huddled in a corner. He appears to be crying, most likely due to all the depressing crap on the set. He turns to look at that arriving elevator, confusion and horror in his eyes, so Rush Limbaugh is probably inside it. But before we can determine if we need to scream and run, we cut to some folks clamoring down a ladder. The camera doesn’t show us their faces, so they might be in the Witness Protection plan after having done something they shouldn’t have at the top of that ladder.

Cut to a close-up of water dripping into a puddle, which is like watching paint dry, only with better sound effects.

Suddenly, we’re in a part of the warehouse where it looks like someone has converted a sinister loading dock into a dance floor, which proves to be very helpful, because Janet and her Rhythm County dancers have just arrived. They quickly get into a triangular formation and simultaneously do that little leg-spreading hop that means “we are about to start performing the intense choreography that will make you feel untalented and useless by the end of the video.”

Close-up of Janet holding up her gloved fingers (what is it with the Jacksons and handwear?) and doing a little countdown for us, then boom, the music kicks in and everybody is bopping all over the stage in perfect synchronization, which means they had to do 300 takes of this bit until everybody popped at the same time, because nobody is that good. The precision-dancing goes on for a while, then we cut to another area with catwalks and lots of unexplained steam.  Some of the back-up backup dancers are over here, undulating on little stages where strippers would normally be if this was a gentleman’s club.

Janet jumps into view, finally kicking off the vocals. She starts explaining why we are all part of the rhythm nation, but it’s a little hard to pay attention because she’s sporting this ginormous, vaguely-military medal on her chest. (What the hell did she have to do to win that?) Speaking of military, everybody is dressed in garb that looks like some type of dark-ops cadet corps. We’ve got a serious uniform fetish going on here. But their intimidating boots sound really cool when they stomp them on the floor, so it’s all good.

We get a glimpse of that young man wandering around in the pipes and steam. You’d think he would have high-tailed it out of here once the 4th Battalion started in with the Electric Slide, but we haven’t lived his life so we can’t really judge his personal decisions in a dank warehouse.

Meanwhile, Janet and her friends are back on the loading dock, doing more gyrations. I notice that Janet’s ponytail is really dramatic, with her copious locks flying about prettily as she whips her head, while the other female dancers have ponytails that have been slicked-up and tightly bound, not moving a millimeter. This seems a little unfair to the non-Janet girls, but maybe this is just something that’s in Janet’s contract. (“I must have the biggest hair or I’m not leaving the dressing room.”)

I guess it doesn’t really matter, since everyone seems to be having a swell time.  We spend a while on the loading dock, occasionally cutting over to this odd, really long room where Janet and the Janettes march toward the camera in a dominating manner, sort of like the “uh oh, that’s not good” scenes in Night of the Living Dead when the zombies band together and storm the old wooden house. (Maybe if the video producers hadn’t decided to film in black and white, I wouldn’t have gone there, but they did, so I did.)

We eventually find Janet and a few of her closest backup dancers in yet another part of the warehouse, where they are doing a special routine that mostly involves them striking various poses that require them to hold their fists up in front of their faces. Okay, then. They are prepared to fight. But, um, what are they fighting? The steam? The script? The over-abundance of reality shows on TV?

We make another visit to the loading dock, because it’s time for another major line dance, this one having something to do with everybody pointing their fingers and thrusting their hips. It’s all very well done, of course, because you don’t get to be in a Janet Jackson video unless you know what the hell you’re doing. The backup dancers are hitting every critical plot point in the choreography as if their lives depended on it. And really, it does. You get your ass kicked off a Jackson shoot, you better have a Plan B for your career choice.

Another shot of the young man just wandering around Area 57 when he really should be finding an exit door. Instead of fleeing, he decides to pause and watch Janet and the drill team continue with their exuberant rhythmic moves. I’m not sure why he’s forced to review the dancing from the other side of a chain-link fence (what is that all about?) but it’s a good thing that he decided to stick around, because this is the section where the choreography goes into overdrive, with the dancing folks performing moves that most humans couldn’t accomplish without a personal trainer and lots of free time on their hands.

This part goes on for a very long time. Not that this is a bad thing, it’s just that the energy unleashed during this segment is enough to power the city of Newark for three years. I was completely exhausted, and all I did was push play. If we could get that kind of power unleashed during election season, the whole country might be in a better place. Food for thought, yes? (Quit eating nachos and watching reruns of Sex in the City, get in the car and go vote.)

Then we head to what I’m assuming is one of the basement levels of the warehouse. (No one handed me a map, so I’m just guessing here.) In this bit, Janet and a select cadre of dancers are performing an interpretive piece that I believe has something to do with… hell, I don’t know. We have cameo dancers who are very limber and can do the splits. They are very invested in their craft, and they perform some admirable moves, especially the one guy (girl?) with the nunchucks. S/he’s whipping those things around with an intensity that would certainly make me pay attention to whatever cause s/he represents. I’m writing out a donation check right now, you can let me know what I just supported some other time. Please don’t whap me upside the head with something on the end of a chain.

Next up, we roll into a montage of Janet and the High-Kicking Cadets doing their thing all over the warehouse. Sometimes we have just a few of them doing something intricate in a shadowy hallway, other times we have the entire population of Nevada doing pelvic thrusts in a massive steam-drenched room full of metal walkways that might be a gay bar in SoHo. Eventually we get to the point where Janet and Friends are doing that extended sequence where they keep popping their heads to one side repeatedly, in what looks like a very painful dance move.  Even the Young Man, who doesn’t seem to have a purpose other than to run around and fail at getting out of here, pauses in his lackluster running with an expression saying “That’s gotta hurt, girl. Why you jackin’ with your neck like that?”

Janet  doesn’t really have time to answer him, because this is also the part of the video where the camera keeps zooming in for a close-up of Janet and that big-ass key hanging from her right earlobe, whilst she sing-pleads for us to “say it for” all of the oppressed people of the world. This is a very admirable plea, but I’m still not getting the military theme with the severe outfits. Or the shadowy darkness. Or the still inexplicable steam that keeps billowing like something mechanical is having an orgasm.

I guess it really doesn’t matter, because we head into the last bit of the story, with Janet and the Janettes doing a final line dance on the loading dock, wherein they seem to be telling the story of what happens when you add sugar to your already-sugared breakfast cereal. These folks are caught up in a synchronized fervor, full of athleticism and grace and a splash of dominance, that it makes us wish for two seconds that we could also be so fit and rhythmic. Then we get over it and go back to eating our bucket of ice cream as we sit on the couch and belch for three solid hours.

Suddenly, Janet and all the Janet-Clones hunch over to the right and freeze in position, abruptly ending their manic choreography. (That’s the downside of a sugar high. Once the beloved white granules work their way through your system, the party’s over. You either eat another fistful of jellybeans or you take a nap.) Apparently the main storyline has reached its conclusion, even if we didn’t realize that there was a story.

Meanwhile, the Young Man, who just wants to get the hell out of here and find a place where people aren’t aggressively dancing for inexplicable reasons, manages to stumble his way toward that elusive Exit Door. He opens it, and a Jackson family member hands him a glove…

Originally published on 05/27/13, revised and updated with extra flair for this post.

This site uses Akismet to reduce spam. Learn how your comment data is processed.