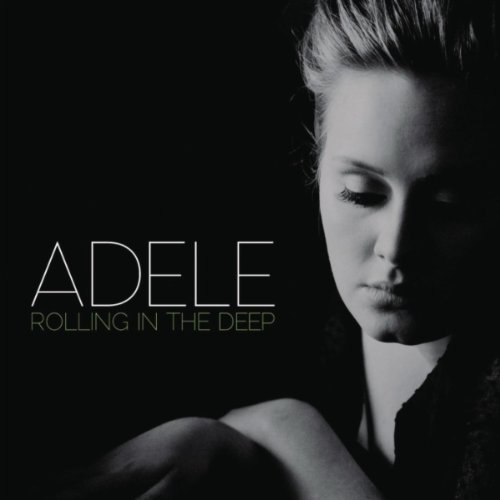 We start off with Adele sitting in a chair, in what might be a hotel conference room, as long as that hotel is somewhere vaguely European. It seems we have some remodeling going on in this hotel, since some of the furniture is covered in plastic and such, but nobody is standing around explaining anything, so who knows. What we do know is that Adele is sporting a hair bun that could easily take over the planet. This makes me a little tense.

We start getting jump shots of a Ninja Woman in another room where there seems to be mounds of snow on the floor. It’s not clear if this is an artsy statement about local weather conditions or an advertisement about the availability of inhalant drugs in this community. Cut to a shot involving thousands of water glasses covering the floor of an otherwise nondescript lobby in said hotel. This makes me think that lazy waiters have not adequately attended to parched customers in the hotel restaurant, and it saddens me.

Then we have a drummer, banging on his instruments while shoved under an obscure staircase. The mystical nature of his origin story is not immediately evident. Has he been bad? Is he in timeout? Or does he just not understand that this is probably not an appropriate place to beat on things?

We get more shots of the brimming water glasses. They are vibrating to the beat of the song, which might be triggering their reproductive instincts and thus explaining why there are so many of them. This is a potentially important development, I’m just not sure why.

At 35 seconds into the fun, we have a tribute to R.E.M.’s “Losing My Religion” video, with crinkled paper taped to a wall, moody lighting and an array of inexplicable props. This is very cool, if they planned it. Not so much if they didn’t. And why is Adele unable to get up from her chair? Is she scared of water? There’s certainly enough of it around.

Oh look, that Ninja Woman has had enough of the snow, and she starts to… I’m not sure what she’s doing. I don’t know if that’s a leaf blower or a walking cane, but she’s using it in a violent manner on the pretty snowflakes. I think there might be some issues that we don’t comprehend, and probably shouldn’t question. Just let the woman work it out.

Okay, we start getting glimpses of some shattered crockery piled up on the floor. It’s never a good sign when you encounter hillocks of violated dinnerware, but let’s see where this goes. Well, it seems that somebody is at the top of a staircase and hurling cups and saucers at a conveniently-placed movie-screen thing, which is resulting in the Pottery Barn fallout on the floor. Since we can’t see the person destroying things while trying to remain hidden and escape blame, I’m going to guess this person is Sarah Palin.

We roll into a montage, with jump shots of culinary destruction, Adele still captive in her chair despite the lack of visible restraints, twirling Ninja Woman with the negative attitude about frozen precipitation, and that drummer who really doesn’t understand that he’s probably not in the right spot if he wants to gain a following. Why can’t he simply go start a band page on Facebook just like 70 million other bands?

Oh, and we have more shots of the glasses. The creepy water glasses all lined up and staring at us with their uniformity and rabbit-like population explosion. And not a single one of them has a lemon wedge. I really don’t care for those things. Just say no.

This goes on for a while. Hair bun, plate-smashing, Ninja ballet and inappropriate drumming. I’m sure there are people watching this who can figure out all of the symbolism in about three seconds and then write a thirty-page essay on the structured allegory of it all, with references to Greek mythology and Enya. I’m not at that point just yet. Apparently I didn’t take the right classes in college or maybe something happened in kindergarten that stunted my ability to process water-based imagery.

Finally, we get something new, with the camera zooming in on what might be a model of the New York City skyline, arranged on a fancy table in a room with discarded deer antlers piled on the left side. Before we have enough time to study the model and figure out where the best subway entrances might be, we have to go back and check up on Bun, Ninja, Drummer, and Glasses. They all seem to still be invested in their original assignments, so we don’t learn anything new.

Brief shots of some ceiling medallions involving man-horses shooting arrows at unseen targets. I’m going to guess that this symbolizes record producers. Or maybe Adele just has a fondness for beastly men with archery skills. But she certainly doesn’t get out of her chair and hand them her phone number.

Suddenly, back at the NYC Skyline Table, somebody sets off what might be sparklers on the ceiling, and flaming bits of some such shower down on the buildings. That’s nice. Like the people of New York appreciate reminders that crap can fall from the sky and force them to make updates in their daily planners. Oh, and it gets better. While Bun, Ninja, Drummer and Crockery continue to cavort, some of the model buildings actually catch on fire and melt. Insensitive, much?

Then again, I wasn’t asked to participate in the planning sessions for this video, probably because I drink too much and they knew I would take too long to answer my emails. So it’s entirely possible that I’ve missed the boat here, with Adele and her producers focused on a vision that has nothing to do with terrorists and disruption of wireless service, and more to do with an embittered woman getting her musical revenge whilst trapped in a hotel where thirsty people are not satisfied.

Final shot is of Adele and her belligerent hair sitting in silence, staring at the floor. She’s probably wondering just how the hell they are going to pay yet another hotel bill where some fool in her posse thought it would be fun to throw plates down a staircase…

Originally published on 04/2011, revised and updated with extra flair for this post.